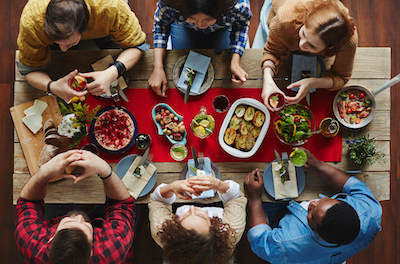 If our hyper-partisan political environment has left you feeling dizzy, Justine Lee and Tria Chang would like to invite you to dinner. Since the 2016 presidential election, the two friends have been organizing, and helping others organize, dinner parties where people from across the political spectrum can come together for a meal and an intimate, civil conversation. Lee and Chang talked to us about the organization they founded, Make America Dinner Again, and how they’re working to build understanding on a very human level.

1) Tell us what inspired you to create MADA.

It’s our passion project: we both felt a lot of hopelessness, darkness, and confusion after the election, and the idea of bringing people together instead of burrowing further into our separate ideologies seemed to be the best way to heal and make sense of things. In our personal lives, we both love and have experience hosting and bringing people together over food, and have over time learned how to hold space for people to learn from another and have some fun, too. Because of this, the dinner format felt very natural and the best use of our skill set and inclinations.

2) Is there a conversation from one of the dinners that sticks out to you as particularly meaningful?

We were honored to have a man named Joe Wilson at one of our dinners. He experienced homelessness earlier in his life, and now is the executive director of Hospitality House, the place where he once took shelter. During one of our dinners, we posed a question to the group: What gives you hope for our country? Joe answered by comparing the U.S. to a family member who you have undying love for, even if they mess up time and time again; you can’t help but hope for a better future for them. This was a poignant moment of recognition for the whole group, that even though everyone at the table had very different ideas about what was best for the country, we all shared a love for it as strong as we felt for a member of our family. The country, no matter how flawed, is a part of us, and hopefully we all felt we were doing something that night to make it a little bit stronger.

3) It feels like the impersonality of social media gives people license to be less civil than they might be in person. Do you see MADA as an antidote to that?

MADA may be part of the antidote, but the disrespect that has become commonplace online is much wider-spread than what we can tackle alone! We are part of a larger movement towards understanding, accompanied by some wonderful groups (like Common Ground). We see MADA as an alternative means of engaging with others that is more effective, more satisfying, and leads to more growth than the typical squabble in the comments section.

It actually takes a great deal of writing skill to communicate in an empathic and relatable way, and most of us are not bringing our A-writing-game when responding to a triggering post. We tend to just want to prove each other wrong, creating a hostile space quickly. Hate between people online can escalate at an alarming rate.

At MADA events, we love to see the effects of in-person conversation. Even though it gets tense at times, it’s hard to ignore the humanity of others when you’re seeing them face-to-face, and have shared a story and a laugh or two before diving into politics. We’re aiming to raise the level of understanding and respect between contrasting viewpoints, one intimate dinner at a time.

4) Do you think these dinners change people’s minds about the issues?

Our dinners are not meant to be a place to debate the sides of an issue, or a place to change anyone’s minds. Our primary goal is to facilitate a space for people to feel safe voicing their beliefs, for people to practice actively listening to one another, and through activities and discussion, begin to build an understanding. We acknowledge that in order to change one’s mind about an issue, it requires a lot more time, nurturing, education, and context-building than a 2-hour dinner allows. After the dinner, we ask our guests to share resources, articles, books, films, volunteer opportunities, etc. that are relevant to the night’s discussion. This allows an exchange of ideas to continue beyond dinner. We also encourage our guests to keep in touch with one another, and have considered facilitating reunion dinners too.

Another idea we’d like to try is a more focused dinner that centers the conversation around a specific issue like race or healthcare, for those who would like to go deeper on a subject. Even then, the primary goal would be to build an understanding rather than change minds – though sometimes, deeper understanding of an issue does lead to change.

5) What advice would you give to someone who wants to start a conversation about tolerance in an environment where constructive dialogue has broken down (for example, the events in Charlottesville a few weeks ago)?

First, we’d feel energized by that person’s desire to start a conversation around tolerance and would want to acknowledge that it’s something special to hold onto. The advice we’d give: exhale. Don’t try to do it all right away. Put out feelers on social media or community boards, seeking individuals and organizations who feel the same, then meet over tea and exchange ideas on how to tackle this with the skills, qualities, and connections you each bring to the table. Consider starting the ‘change’ with yourself. Be open to opportunities to bridge gaps in understanding that come up in your own life, and learn from them, whether it’s through a disagreement with a loved one or an acquaintance. Set ground rules for yourself in potentially contentious discussions, and abide by them. Be patient and think about the long-game. This is going to take time.