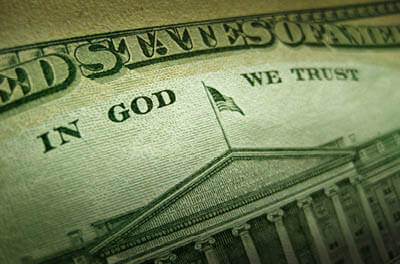 Church and other faith leaders endorsing candidates. Elected officials invoking God in political speeches. What role did our nation’s founders intend for religion to play in public life?

In 1789, George Washington set a new precedent by placing one hand on a Bible as he took the first presidential oath of office. On D-Day in 1944, Franklin Roosevelt made only one public statement, in the form of a reading he adapted from the Episcopal Book of Common Prayer. Although Article VI of the Constitution states that “no religious Test shall ever be required as a Qualification to any office or public Trust under the United States,” religious beliefs have long influenced our public officials.

A little historical background on “religious tests” puts our Constitutional language into context. In 1672 and 1678, the British Parliament passed the Test Acts, which required government officials to disavow Catholic doctrine and recognize the Church of England, effectively keeping Catholics and some Protestants as well out of government. In the United States, the Founders wanted to ensure no such test would apply so that people of any faith could serve in government.

In an extensive exploration of how the Founders viewed religion and government, historian John Meacham writes that the authors of the Constitution did not seek to banish religious beliefs from public life. The “wall of separation” they created was designed to separate church from state, not religion from politics. Article VI requires that members of all three branches of government, as well as state government, swear an oath to support the Constitution, but it does not specify that this oath should be religious in nature.

The authors of the Constitution did not believe that faith stood in opposition to freedom, Meacham explains. They believed instead that God created men free, and that any attempts by government to compel religious belief violated an individual’s God-given liberty of mind and conscience. The Declaration of Independence reflects this belief when it refers to the “Creator” and “Nature’s God” as the source of our inalienable rights – among them the right to freely choose one’s own religion, or to choose no religion at all. The belief that no government can take away what God has given is a cornerstone of human rights in the United States.

Belief in God is central to our nation’s experience and often overlaps with our politics. Some of the most divisive social issues of our day – reproductive rights, same-sex marriage, and stem cell research, for example – are religious controversies at heart. The abortion debate, for example, invokes several complex moral questions. When does life begin? And under what circumstances is it permissible to have an abortion: in cases of rape or incest, when the pregnancy endangers the life or well-being of the mother, or when the child carries a mental or physical defect that will cause terrible suffering or an early death?

The First Amendment prohibits Congress from imposing the beliefs of one faith on citizens with other religious beliefs. Still, different religions (and different branches within religions) offer a wide range of answers to the questions we face, and the motives of many citizens who seek to regulate choice regarding contraception and abortion are clearly religious in nature.

The question of where church ends and state begins is also a perennial one in public schools and government meetings, where prayer is welcomed by some and avoided by others. In the context of the First Amendment, prayers to the God of any particular faith are out of place in either setting, though references to God, or a plea for God’s guidance or blessing, are not. As Meacham notes, unifying references to God leave each of us free to imagine God in whatever form we wish, or to imagine no God at all. When a President says, “So help me, God” upon taking the oath of office, or “God Bless America” at the conclusion of a public address, each of us is free to define that God in whatever terms we choose.

In these and other ways, the “wall of separation” created by the Constitution does not prohibit different forms of religious expression in public life. It does, however, separate church from state – and in doing so, writes Meacham, it protects them both. On one side, the beliefs and practices of all religious faiths are protected against government interference. On the other, the governing institutions of our nation are insulated from the influence or control of any particular faith.

In this way, he concludes, the First Amendment guarantees that no one religion is singled out for special help or for particular harm. Ingeniously, the government created by our Constitution promotes religious belief by leaving it alone.

American Gospel: Historian Jon Meacham gives an interview on the role religion should play in public life and the history of separation of church and state in the U.S. – via C-SPAN

Divine Sanction: While there’s debate about whether and why George Washington added “so help me, God” when taking the oath of office, one scholar says the Founders were clear about the role of God in government – via Bloomberg

The Religious Typology: To create a new classification of religion in America – ranging from intensely faithful to firmly secular – researchers analyzed beliefs and behaviors that cut across religious denominations – via Pew Research Center

City on a Hill: A Republican senator joins a leader of the Southern Baptist Convention in writing that a constitutional guarantee of religious freedom was revolutionary in America’s early days, and that we have an obligation to “demonstrate the depth of this powerful human right” to the rest of the world – via Time

This article originally appeared in the January 12, 2020 issue of Wide Angle, our regular newsletter designed, we hope, to inform rather than inflame. Each edition brings you original articles by Common Ground Solutions, a quiz, and a round-up of news items — from across the political spectrum — that we think are worth reading. We make a special effort to cover good work being done to bridge political divides, and to offer constructive information on ways our readers can engage in the political process and make a difference on issues that matter to them.